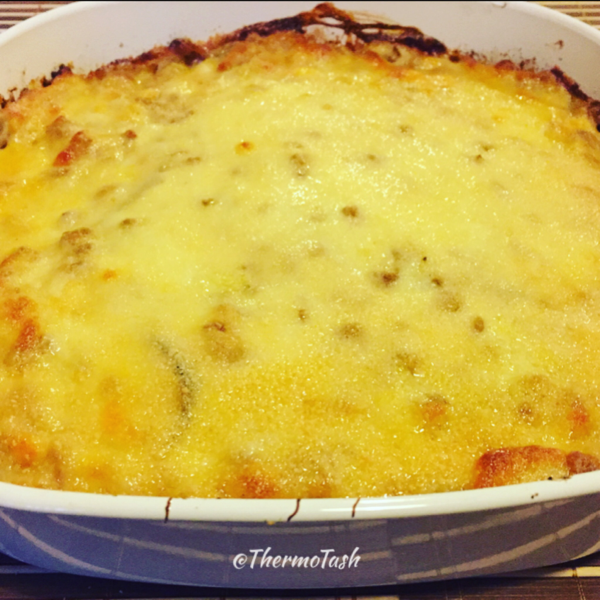 The Moussaka recipe in the Everyday Cooking for Thermomix Families TM5 cookbook had looked appealing to me but I kept putting off making it. The main reason being that I was put off eggplants after making an eggplant parmiagana stack years ago but not slicing the eggplant thick enough. Lesson learnt!

So when I finally created this recipe I made sure I sliced the eggplant nice and thin. Then when placing it in the Varoma I needed to make sure there was still room for the steam to move around. To do this I placed two chopsticks in the bottom of the Varoma dish before placing the eggplant slices in the dish and the tray.

After steaming the eggplant it was time to cook the mince. I admit this was my first time cooking mince in the Varoma that was meatballs or meatloaf. When it was time to mix the mince around I decided to swap the mince that was in the dish with the mince in the tray to ensure even cooking. The sauce was bubbling away and smelling so good.

After the mince and sauce was cooked it was time to start layering the eggplant with the mince sauce which I actually spread over two baking dishes because it had made so much. Then it was time to make the bechamel sauce (which is always a breeze with Thermomix) and spread it over the top and then sprinkled with the grated Parmesan.

I was starving by the time it was cooked (the smells wafting from the kitchen didn’t help) and it did not disappoint. This meal was delicious! And it got me over my aversion to eggplant 😉

I'm a Thermomix consultant in Perth. I started this page to share what inspires me and I hope it inspires you too.